Hannah is a multi-instrumental session musician. She plays double bass, piano, violin and mandolin and graduated from the Royal College of Music in London with a Bachelor of Music (Hons) degree in 2016. During her time at RCM she studied with Thomas Martin and Neil Tarlton and was involved in many orchestral projects working with esteemed conductors such as Bernard Haitink, Vladimir Ashkenazy and John Wilson to name a few. Before her time at college she worked with bands Fifth House and Sweeney Astray and started gaining experience in studio recording. Hannah continued to play as a session musician while she was studying and has recorded extensively for many up and coming film composers both in the professional studios at RCM and during full orchestral live recordings conducted by Alastair King. Outside of college she played double bass for a symphonic version of Pink Floyd’s Wish You Were Here at Abbey Road Studios in London and she has also appeared on an Enya music video. Hannah has also worked as a session player in both Angel studios and Ealing studios in London. She has performed with the London Electronic Orchestra led by Kate Simko for whom she played at Midem Festival 2016 in Cannes as part of the Midem Artist Accelerator Concert Series. Hannah has worked with singer songwriter Ella Shaw and has performed for both Ella’s debut album launch and for an appearance on Vintage TV’s Sessions at Dingwalls in Camden. Hannah is currently working with renowned producer Charles Foskett on his new folk band project Pitmatics as a fiddle player and vocalist. 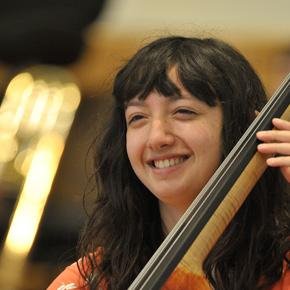